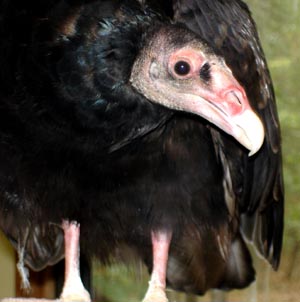 Distribution: Turkey Vultures are found throughout Central and South America, the United States, and parts of southern Canada.

Lifespan: Turkey Vultures can live for more than 17 years in the wild, 20 years in captivity.

Reproduction: Turkey Vultures nest in caves, under bushes, or in hollow tress or logs. They lay 2 eggs which are incubated for 38-41 days. Young vultures fledge at 10-11 weeks of age but often stay as part of a family group until the next breeding season.