What is a bird atlas?

A chance to put your birdwatching skills to good use! Bird atlas projects consist of intensive surveys for birds in specific geographic regions during a specific period of time. They differ from informal birdwatching in that standardized survey designs and data collection and recording methods are employed, enabling repetition of the surveys over time, and comparisons of changes in bird distributions within a region from one iteration of an atlas to the next. In North America, most state-level atlas projects are completed in a five-year time frame, and are repeated at 20-25-year intervals, providing long-term if intermittent monitoring of bird populations. Breeding bird atlases examining distributions of nesting birds are the most common type of bird atlas in North America, although in some regions here and abroad, year-round bird atlases are attempted. Oklahoma is one of few locations to have completed a winter bird atlas as well as a breeding bird atlas.

Bird atlas projects date back to Britain in the 1960s or 1970s, or even earlier in less formal versions. Widespread adoption in North America took place in the 1980s and 1990s, with a majority of states and provinces ultimately completing breeding bird atlases. Many of these states have completed or are currently working on second atlas projects, and some are even working on a third atlas. Oklahoma’s first breeding bird atlas surveys took place from 1997-2001. Our second breeding bird atlas is launching in 2020, with completion planned in 2024. The results from this second breeding bird atlas will be compared to those from the first atlas over 20 years ago to document any changes in bird distributions in Oklahoma during the intervening years. See page https://www.suttoncenter.org/research/ok-bird-atlases-surveys/ for more information about previous surveys.

How can I help?

There are 583 randomly selected blocks of land in Oklahoma that need to be surveyed for birds during one spring and summer. Each block of land is about 3×3 miles in size, although you likely won’t be able to visit every part of each block. Volunteers skilled at bird identification are needed to help with these bird surveys for the second breeding bird atlas. If you can identify the summer birds found in Oklahoma, and if you have transportation and some free time, please join the project! We need you to visit each block you sign up for at least once before May 15 and at least once after May 15 to look for as many species as you can find in each area, and to record some basic behavioral observations of birds that provide evidence of nesting, such as a bird carrying nesting material or food to a nest. A total of 10 hours or more should be spent surveying each block. We provide complete instructions, maps and data forms to volunteers.

We are now signing up volunteers for the 2023 season. View the nine Oklahoma region maps below to see locations of blocks that need to be surveyed. Choose one or more blocks that you are willing to survey, and fill out the sign-up form below. If you have questions, contact Dan Reinking at 918-336-7778 or by email at dan(at)suttoncenter.org.

With your help, we can accomplish surveys of about 120 blocks in each summer of this project, and finish all 583 blocks in five years!

Special thanks to atlas project funders, who along with volunteers, make this project possible! 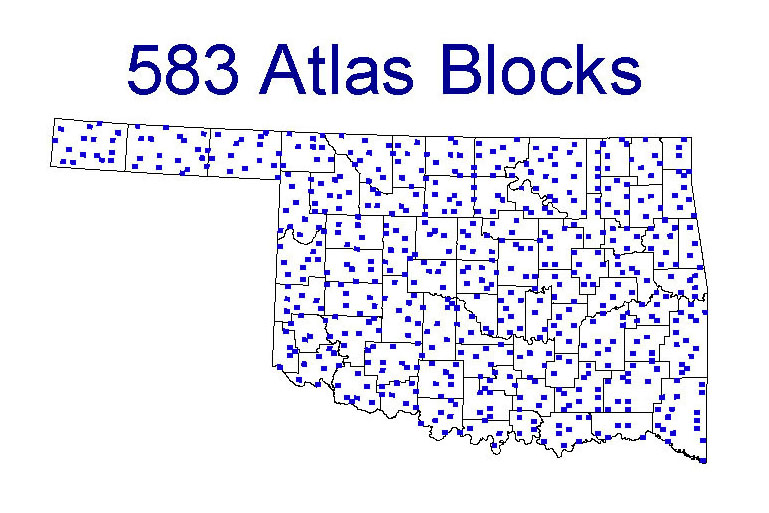 Here is a map dividing the state into 9 regions. Scrolling down you will find more detailed region maps showing specific atlas blocks.

These maps do not update in real time. We will try to keep them up to date as people sign up, but it is possible that more than one person could sign up for the same block. The person who signed up first will receive the assignment, and any others will be notified to make another choice.

All block numbers shown on the maps include two decimal points, for example, block number 3609628.11 as shown in northeastern Payne County on the first map below.