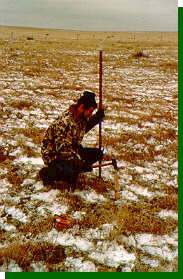 In 1996, we conducted a study of birds in shortgrass prairie at the Rita Blanca National Grasslands in the Texas panhandle. Shortgrass prairie ecosystems evolved under tremendous grazing pressure by herbivores such as bison, black-tailed prairie dogs, and to a lesser extent, elk and pronghorn.

These species, particularly the bison and the black-tailed prairie dog, have been largely removed from their former ranges in shortgrass prairie habitats and replaced with domestic livestock. Some biologists have suggested that shortgrass prairie ecosystems may have changed very little since the introduction of livestock because bison were simply replaced by cattle as the primary large herbivore.

However, ecological and behavioral differences between cattle and bison coupled with other changes to the landscape, such as the installation of fences, suppression of fires, and implementation of agricultural practices may have altered shortgrass prairie ecosystems. Free ranging bison probably influenced shortgrass prairie ecosystems differently than present-day cattle that are confined by fences.

Results of our research will provide the U.S. Forest Service with needed information about the impacts of livestock grazing on populations of shortgrass prairie birds. Some species that are found nesting in our study areas include Long-billed Curlews, Horned Larks, Western Meadowlarks, Grasshopper Sparrows and Lark Buntings. 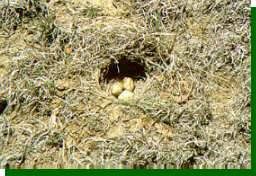 Close up of the nest at bottom center of previous photo. Close attention is needed by the parent birds to shade the exposed nest in the heat of the day. 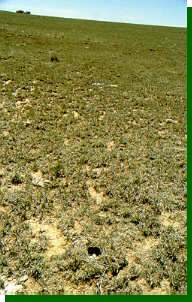 Nests are hard to locate in the featureless shortgrass prairie, although a close examination will reveal their presence. Can you see the nest? 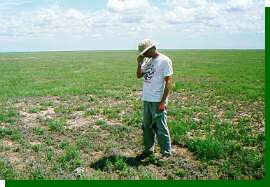 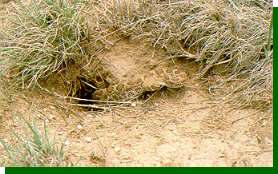 Prairie rattlers are just one of the dangers faced by nesting shortgrass prairie birds.