The Sutton Center has taken on a significant new conservation project – breeding the Attwater’s prairie-chicken for release! The Attwater’s Prairie-Chicken (APC) is one of the most endangered birds in North America, and it is essential to increase captive production of this species in order to provide enough birds that sustainable populations can be re-established in the wild. We are ready to give our best efforts to help with the recovery of this special bird. 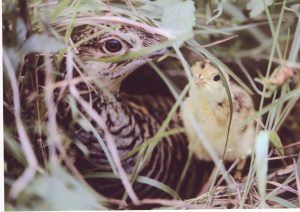 Dangling on the edge of extinction for decades, this grassland grouse once inhabited six million acres of prairie along the Gulf Coast from Corpus Christi, Texas, north to the Bayou Teche area in Louisiana, and for some 75 miles inland.

As grasslands were consumed by human settlements, industries, agriculture, brushy vegetation, and possibly pesticide use on rice crops, the estimated population of close to one million birds about a century ago plummeted precipitously. It was listed as endangered in 1967, and by 1996 only 42 birds were left in the wild.

Attwater’s prairie-chickens are currently being kept in captivity at Houston, Caldwell, and Abilene Zoos, as well as Fossil Rim Wildlife Center in Texas. These breeders are carefully managed genetically, and their offspring are released annually (286 in 2016) at the Attwater Prairie Chicken National Wildlife Refuge in Texas. However, with a relatively short life span (for most, about two years) and owing to flooding, red imported fire ants, and other predators, only a limited number of APCs are able to successfully reproduce in the wild.

A main objective in the APC Recovery Plan is to increase propagation and release efforts to boost wild populations to self-sustaining levels. This is where the Sutton Center has work to do! 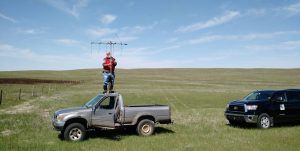 In May 2015, with direction from Dr. John Toepfer, we located prairie-chicken nests in northcentral Nebraska and collected 41 eggs. (The hens later recycled and produced second wild clutches.)

Half of the eggs were brought back to Oklahoma in an airplane, the other half in an incubator on top of a pillow in a pickup. Forty eggs hatched successfully, and those prairie-chickens are now parents of another 54 chicks that hatched in 2016. Different behavioral treatments and breeding methodologies will be tested on offspring from 2016.

Greater Prairie-Chicken hen incubating in the wild (left) and her 14-egg clutch (right).

Developing eggs in a contact incubator. Candling of egg to determine health of embryo. Pipping and hatching eggs. Newly hatched chicks snuggle in towels against a heating pad.

The Sutton Center’s breeding facility team is working carefully when designing the enclosures. For example, netting separates the prairie-chickens from walls and frames, since they are very powerful and fast flyers, and can kill themselves by flying into hard objects.

A netted enclosure protects the captive prairie-chickens as well as allows them to live in natural habitat, shown here in early spring when the grass was short. 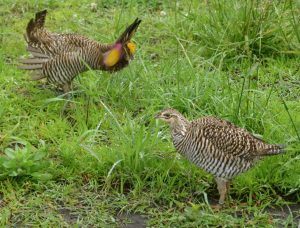 A captive male Greater Prairie-Chicken courts a female in a naturally vegetated enclosure.

The captive breeding of disappearing prairie-chickens or other grouse will not in itself solve the problems that these birds are currently facing. This must be accomplished in combination with habitat reclamation, management, and conservation efforts. We hope that what we learn from the APC breeding program will also be useful in achieving higher survival and reproduction in the wild of other captive bred Galliformes like bobwhite quail, lesser prairie-chickens, and other grouse as needed. 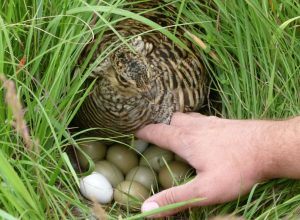 We want to extend special thanks for making the egg collections possible: 1) Dwight Boesiger, for plane, fuel, and piloting, 2) Bill Vodehnal and the Nebraska Game and Parks Commission for permit to collect eggs, 3) Richard Hatcher and Bill Hale with ODWC for providing an import permit, 4) Rich Lackaff for providing land access, and 5) Dr. John Toepfer for guiding and providing expertise and nest locations.

Thank you to all the corporations and supporters who helped with purchase of property to build the facility, including Chapman Foundation, Devon Energy, NatureWorks, Harold & Sandy Price, Sarkeys Foundation, Williams, and Joseph H. Williams.

This video produced by Friends of Attwater Prairie Chicken Refuge provides some background information about Attwater’s Prairie-Chickens and the work underway to save them.

Little Grouse on the Prairie from FAPCR on Vimeo.