Many bird species worldwide as well as in Oklahoma are declining. One recent study suggests that there are nearly 3 billion fewer birds today than there were in 1970! Bird atlas projects help track these declines, and are intended to be repeated at about 20-year intervals to provide ongoing information about bird populations, allowing conservation for declining species or groups of species to take place before they become endangered and much more difficult to save.

Oklahoma’s first breeding bird atlas surveys took place from 1997 to 2001. It is time to repeat these surveys for Oklahoma, and the Sutton Center is again taking the lead in completing this monumental task. Each of the 583 randomly selected blocks of land shown on the map below needs to be surveyed for nesting birds. Volunteers who are skilled at bird identification and willing to travel help with much of this work. Contact us if you are such a person and would like to help!

You can also help by clicking the Donate button at the top of the page to support the Sutton Center’s work on behalf of Oklahoma’s birds. If you wish, you may use the Comments section on the Donate page to direct your donation to bird atlas projects.

A finalist for the 2005 Oklahoma Book Award! Available from the University of Oklahoma Press web site or at Amazon.

The Atlas utilized volunteers who surveyed approximately 600 randomly determined “blocks”, attempting to identify all the species potentially breeding in those blocks. Since the field work was completed, maps showing the breeding distribution for each species throughout the state have been produced, and coupled with text and a color photo for each species. The resulting book is currently available at the University of Oklahoma Press. 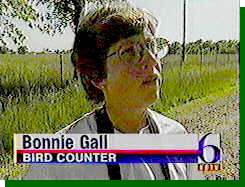 The atlas project was featured on KOTV 6 in Tulsa.

One long-term benefit of an atlas project is that it can be repeated in 20-25 years, and changes in the distributions of breeding birds may indicate the well being of those species in the state.