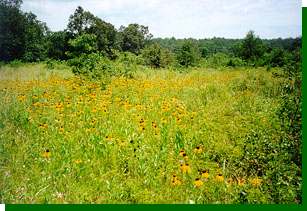 Camp Joseph T. Robinson, located in North Little Rock, Arkansas, is a 33,000-acre (13,313-hectare) training facility of the Army National Guard. Soldiers take part in a wide variety of infantry, artillery, and small weapons training exercises at this base. Despite these activities, much of the habitat for birds and other wildlife is relatively undisturbed.

No long-term, systematic observations of bird occurrence on Camp Robinson were made until the mid-1990s. From 1994 to 1996, a University of Arkansas graduate student conducted a study of bird habitat usage on Camp Robinson. Along with 137 other species, he observed 4 species that are suffering from population declines throughout large portions of their ranges and that may breed on Camp Robinson: Bachman’s Sparrow, Loggerhead Shrike, Cerulean Warbler, and Northern Bobwhite. 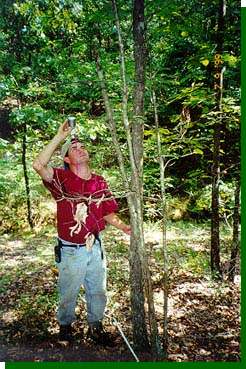 To help protect these species on Camp Robinson, the Army National Guard contracted the Sutton Avian Research Center to identify important areas and habitats for these birds, potential threats to their continued presence on the camp, and actions that would conserve their populations and improve habitat.

This Rough Green Snake is one of many species at Camp Robinson.
From 19 April to 30 July 1999, we conducted surveys for these species to determine where they were occurring on Camp Robinson and to estimate their population sizes. We also searched for their nests plus the nests of other species to find out if Brown-headed Cowbirds were negatively affecting their reproductive efforts.

Beginning in late April 1999, we searched Camp Robinson for Bachman’s Sparrows and their habitat. We recorded 44 detections of sparrows. Many of these detections were of the same individuals – there were probably 15 or so singing birds during the study. Some of these birds were present throughout the study. Others were only seen once or twice. We also found 2 nests and 2 groups of fledglings, showing that Camp Robinson is used for breeding by sparrows. Based on the continued presence of singing males at several locations, we estimate that 7-9 pairs attempted to breed in 1999.

All but one sparrow was found in old fields with a grassy understory and a few scattered trees. The exception was found singing in a small opening in a planting of pines. We measured several characteristics of the vegetation at spots where sparrows were found and made comparisons to vegetation at random spots in open fields. For the most part, the vegetation was similar, but there were fewer shrubs in sparrow habitat.

As we did for the other species of concern, we searched for Northern Bobwhites and their habitat beginning in late April. We recorded 149 detections. As with sparrows, many individuals were detected multiple times.

We recorded the locations of Brown-headed Cowbirds beginning in late April. We recorded 145 locations. Unlike the other species we studied, cowbirds were widespread on Camp Robinson and were found in almost all areas and habitats we visited. However, they appeared to be most numerous in old fields.

We found and monitored 46 nests of potential cowbird host species. Most of the nests were located in old fields. We found 6 nests (13 percent) that were parasitized by cowbirds, but of those 6 nests, the host bird accepted the egg in only 2 cases. Host birds usually abandoned the nest when a cowbird laid an egg in it. 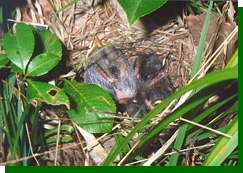 Three host eggs and one cowbird egg ultimately hatched, but the nest was later destroyed by a mammalian predator 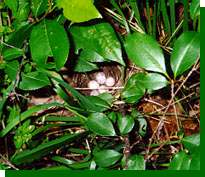 Of course, cowbirds may have parasitized nests more frequently; however, finding a nest after it has been abandoned is very difficult. Also, we would not know if a nest was parasitized if the host ejected the cowbird’s egg.
Compared to cowbird parasitism, nest predation was a much more frequent cause of nest failure. Nineteen of the 46 nests were depredated, and an equal number successfully fledged young. In many cases of predation, the nest structure was not disturbed, suggesting that the major nest predators were snakes – mammals such as raccoons tend to pull the nest down.

During our searches for Loggerhead Shrikes and Cerulean Warblers, we located only 2 shrikes and 1 warbler, and all birds were seen only once in April and May. The individuals we found were probably still migrating. These species are probably not breeding on Camp Robinson.

Suitable habitat exists on Camp Robinson for Bachman’s Sparrows and Northern Bobwhites. Management actions such as prescribed burning will help maintain habitat and perhaps create new areas for breeding by these species.

Loggerhead Shrikes and Cerulean Warblers do not breed on Camp Robinson. For shrikes, the reasons why are not clear. Their absence may be due to a lack of the appropriate trees and shrubs in which to build their nests. The creation of hedgerows in open areas with short grass, such as the golf course, may provide nesting habitat. Forest species composition, structure, and age on Camp Robinson is not suitable for Cerulean Warblers.

Brown-headed Cowbird nest parasitism rates are relatively low, and host species apparently have developed a strategy (nest abandonment) to deal with parasitism. Cowbirds do not need to be controlled on Camp Robinson as they appear to have no significant impact on breeding of host species.