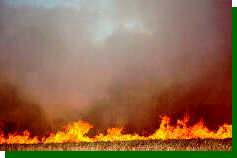 North America’s tallgrass prairie has been devastated–only about 4% of it remains, with the remnants generally small and widely scattered. As a result of this habitat loss, populations of breeding birds dependent on tallgrass prairie have declined markedly. But there may be additional factors behind the population declines. In particular, conservationists and wildlife managers need a clearer idea of how avian productivity, not just occupancy and abundance, is affected by current land use.

With this goal in mind, the Sutton Avian Research Center initiated an extensive study in 1992 aimed at determining the relationships between land management, chiefly cattle grazing and prescribed spring burning, and reproductive output of a suite of grassland birds. The study also focused on potential indirect effects of land use on nest success, such as resultant changes in predation by reptiles, birds, and mammals, availability of arthropods, or brood parasitism by the Brown-headed Cowbird. 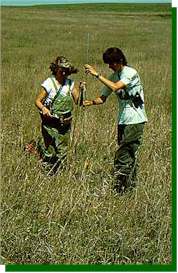 Measuring height and density of grassland vegetation. These factors affect the species composition and abundance of grassland birds.

The study site, located in northeastern Oklahoma, consisted of eighteen 16.2-ha (40 acre) plots located on The Nature Conservancy’s Tallgrass Prairie Preserve and on nearby privately owned ranches. Fifteen of these plots were grazed and or burned annually; the remaining three plots were “controls,” being neither grazed nor burned. On each plot we located and monitored nests, conducted point counts, quantified vegetation, recorded predators, and sampled arthropods. By the field study’s end, in summer 1996, Center personnel had located and monitored nearly 2800 nests of over thirty species on these study sites. A mere four species–the Dickcissel, Eastern Meadowlark, Grasshopper Sparrow, and Red-winged Blackbird–accounted for over 80% of these nests. The first three of these species are grassland obligates.

The Center continues to analyze the vast amounts of data collected during this study. Various aspects of this data have already been published, such as: 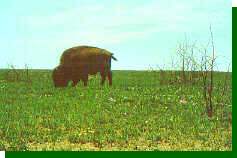 In addition to these papers, Center personnel produces a host of notes detailing a variety of discoveries and new information on tallgrass prairie birds in Oklahoma.

A number of additional manuscripts have been completed, some of them of in review for publication, others in the writing, research, or analysis stage.

Nonetheless, we can share some interesting results uncovered thus far. For example, nest survival is lower on burned plots than on unburned plots.

Among the unburned plots, nests survive longer on those plots that are ungrazed:

But the story does not end there. An examination of the birds’ tendency to commence nesting efforts suggests that they prefer to nest in burned plots then in grazed plots then control plots:

The mosaic of habitat types left following a burn provides habitat for the greatest diversity of grassland birds.
This tendency appears to stem from an increased abundance of arthropods on burned and grazed plots. Thus, the birds appear to choose nest sites on the basis of food availability, but their success is lower in those food-rich plots because, it appears, the abundance of nest predators is also elevated.

It is not just the rate of nest predation that increases on burned and grazed plots–the rate of cowbird parasitism also increases: 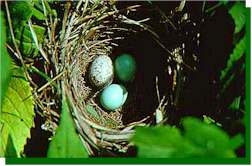 Brown-headed Cowbirds are brood parasites, meaning they lay their eggs in the nests of other species, leaving that host species to incubate the eggs and feed and raise the young cowbirds. This behavior can have a severe impact on certain host species, especially those already rare.

The rate of parasitism is related to many factors, but the landscape appears to be a major one. Past research has shown that cowbirds preferentially parasitize nests closer to roads and nearer open patches in forest. Our data suggest that the extent of grazing is a much more important predictor of the probability of having a nest parasitized. Nest placement also has a big effect on the probability: