From 1997 through 2000, we captured 216 Greater Prairie-Chickens in Osage County , Oklahoma , 204 of which were radio-tagged. Research was conducted on The Nature Conservancy’s Tallgrass Prairie Preserve, and other nearby private ranches. The Greater Prairie-Chicken population in Oklahoma declined dramatically in the early-mid 1990s, prompting the Oklahoma Department of Wildlife Conservation to close the hunting season in 1997 until a certain population standard is met.

During four years of work, over 10,000 tracking locations were recorded and 73 nests were found and monitored. Blood samples were taken from birds in 1998, 1999, and 2000 for reticuloendotheliosis virus surveys. The results of this effort have been published in Wiedenfeld et al. (2002). Data analysis and manuscript preparation continue on many other aspects of our research. You can check for publications on our Publications page.

Sandra Dickey, a reporter from the Ponca City News, spent two days with us photographing prairie-chickens and interviewing crew members. She has also put together a web-site on our work. Joel Sartore, the National Geographic photographer who did such a superb job documenting our Bald Eagle project in the November 1992 National Geographic also spent three days with us photographing booming prairie-chickens and our trapping efforts. Some of his photographs are included here. Others, including some photographs from some of his other assignments can also be found on his site. 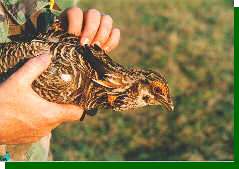 Locations of the prairie-chickens are recorded using the global positioning system, then entered into a Geographic Information System (GIS) mapping program. Using the GIS, we can combine many different habitat themes, such as rivers, highways, or habitat types, to see how the prairie-chickens respond to those factors. 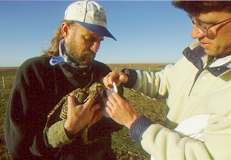 A sock is placed over the head of a captured prairie-chicken to keep it calm while measurements are made and a transmitter is attached. 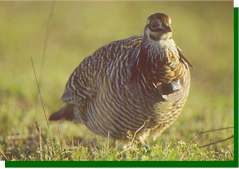 Notice the radio around the neck of this prairie-chicken cock. image (c) Joel Sartore www.joelsartore.com 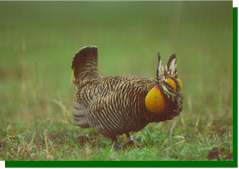 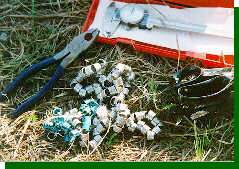 Equipment used for measuring and banding the prairie-chickens. 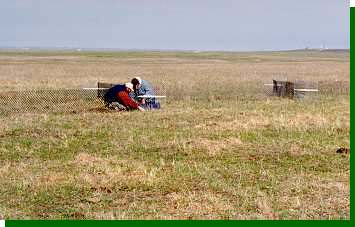 Working hard to ensure that the traps are perfectly set for next morning’s trapping. 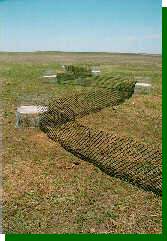 A line of prairie-chicken traps set up on the booming ground. 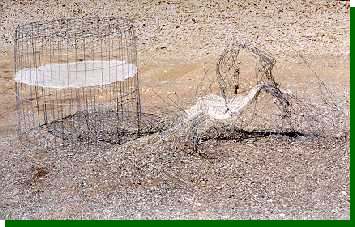 Prairie-chicken traps are no match for free-roaming bison, although the trap on the right put up a gallant fight! 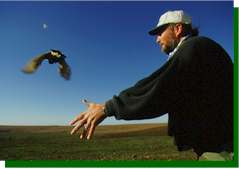 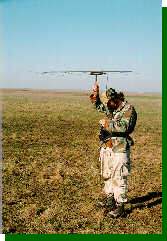 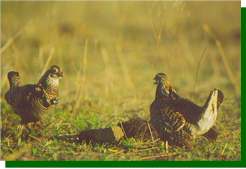 Pair of booming males face off. Radio can be seen on bird at left. image (c) Joel Sartore www.joelsartore.com