For a type of bird that generally exists in arctic environments, White-tailed Ptarmigan may seem out of place in New Mexico. However, because the alpine environments of the Rocky Mountains mimic the arctic Tundra, this species is right at home only an hour’s drive from Santa Fe.

However, under a changing climate the “sky islands” where this species has held on since the Ice Age are disappearing … squeezed ever-upwards by prolonged warm periods in summer.

Biologist Don Wolfe had been coming to New Mexico’s rocky peaks for years and was beginning to notice the decline of ptarmigans on the mountains. In 2009 he began an effort to study the thermal ecology of rocky slopes where the ptarmigan were found and where they had apparently disappeared in the last 50 years. Using temperature dataloggers we are continuing to examine fluctuations in temperature at sites above 12,000′ across seasonal to hourly timescales. 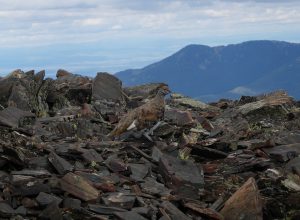 A White-tailed Ptarmigan above treeline in New Mexico. Photo by Don Wolfe.

Why is thermal ecology important to study? Atop these mountains the peak summer temperatures, although only in the 70’s Fahrenheit (mid-20’s Celsius), can be deadly hot for ptarmigan. The birds may seek shelter in refugia, such as in crevices in boulder fields or under ledges, that will remain cool on even the hottest days. Our research seeks to determine if the available refugia on still-occupied mountain peaks show significantly different temperature profiles (relative to the nearby surface) than at refugia atop mountains where ptarmigans have disappeared.

Our team continues to collect and analyze data on ptarmigan thermal ecology because multiple years of study are needed to uncover a pattern in climate. We are also collaborating on genetic specimen collection and analyses designed to reveal the genetic relationship between New Mexico and Colorado populations. If these populations were disconnected, then the ptarmigans of the New Mexico sky islands would be very much in danger of extinction in the near future and would warrant immediate and drastic conservation efforts, such as translocation or habitat improvements.