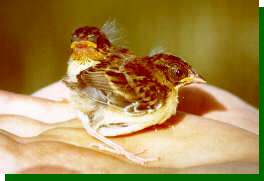 The Henslow’s Sparrow nests in natural grasslands and pastures in the midwestern and eastern U.S. and Canada. As evidenced by U.S.G.S. Biological Resources Division’s Breeding Bird Survey data and other studies, the Henslow’s Sparrow has steadily declined in abundance and distribution during the past 25 years. Population declines and concurrent range contractions have prompted the USFWS to designate this species as a candidate for listing as threatened or endangered.

Prior to the first confirmed nesting of Henslow’s Sparrow in Oklahoma in 1987, less than twelve reports of occurrence existed in the state. In 1992, the Sutton Avian Research Center initiated a five-year study designed to evaluate the impact of various land use practices on breeding prairie passerines in Oklahoma.

During our first field season we discovered a substantial breeding population (roughly estimated at three thousand singing males) of Henslow’s Sparrows on the Nature Conservancy’s Tallgrass Prairie Preserve in Osage County, Oklahoma. Although this area falls outside of the widely published breeding range of Henslow’s Sparrow, this may represent one of the largest breeding populations in North America.

The current range and nesting ecology of Henslow’s Sparrows in Oklahoma is poorly understood. In addition to the large 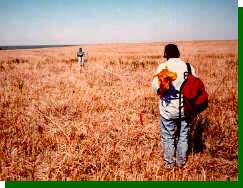 population recorded on the Tallgrass Prairie Preserve, scattered smaller sub-populations and individuals have been reported recently during the breeding season in other areas of Osage County and four other counties in northeastern Oklahoma.

In 1996 we conducted a project to determine the distribution, relative abundance, and breeding habitat requirements of Henslow’s Sparrow in northeastern Oklahoma.

See the Sutton Center’s publications page for published results of our work.