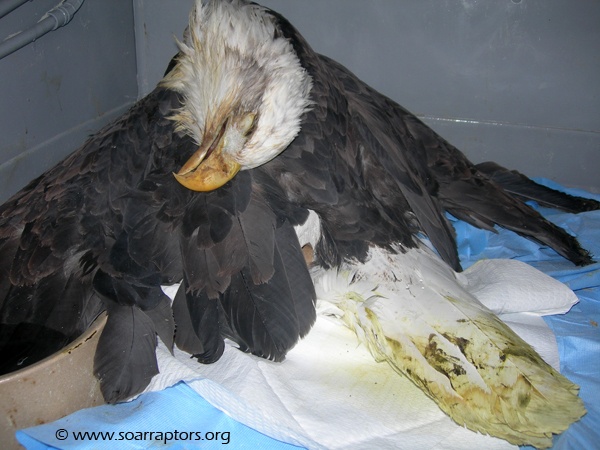 Birds such as bald eagles rely on the ability to fly to evade predators and capture prey, so losing the capacity to take flight can mean the difference between life and death. Lead poisoning causes the same symptoms in wildlife as it does in humans- seizures, impaired motor functions, diarrhea, and even death to name a few. The photo to the left shows the devastating effects of lead poisoning for bald eagles. The Raptor Center at the University of Minnesota captured the video below which showcases the seizures and partial paralysis that lead poisoning manifests in an adult Bald Eagle.

While treatment does exist to treat a lead poisoned bald eagle, there are no means of finding each one that has ingested lead ammunition, so determining how many of these birds we lose to lead poisoning each year is a monumental task. Even if we could locate every bald eagle that has consumed lead ammunition and attempt to reverse the effects, the treatment is often not enough and the concentration of lead too high, to save our National Symbol from the permanent neurological damage that lead poisoning inflicts. Instead, prevention is our best chance in keeping the bald eagle off of our endangered species list, where it remained until 2007.

Why are Bald Eagles eating lead anyway? (click to find out)