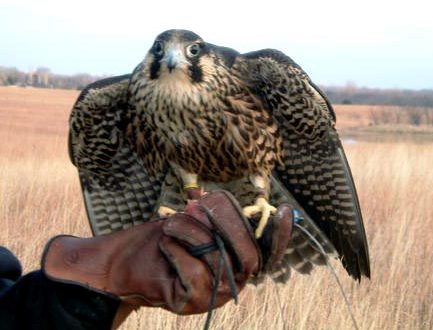 Distribution: Peregrines are found on every continent except Antarctica and live in a variety of habitats from tropics to deserts, from sea level to 12,000 feet.

Size: Peregrine Falcons are 15-20 inches long, weigh approximately 1-3 lbs, and have a wingspan of 3 1/2 feet. Males are about 1/3 smaller than females.

Diet: Birds such as jays, woodpeckers, blackbirds, sparrows, starlings, pigeons, and waterfowl make up the bulk of the Peregrine’s diet (which they typically catch in the air). They are also known to eat mammals, insects, and reptiles on rare occasions.

Lifespan: These falcons can live up to 19 years in the wild.

Reproduction: Peregrines do not build nests, but scrape out a depression on a ledge, cliff, or in an abandoned stick nest, usually near a body of water. Here they lay 3-4 eggs which they incubate for 33 1/2 days until hatching. Fledging of young occurs at about 6 weeks of age. Young, however, usually remain in the family group for about six weeks after first flight.