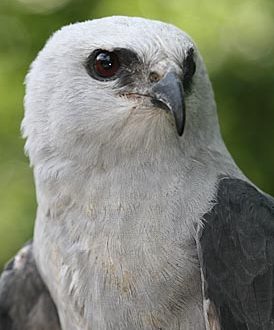 Distribution: Mississippi Kites are found through parts of southeastern and central United States and are known to migrate to central South America.

Diet: These kites eat mostly insects that they catch in flight and consume on the wing. They will also eat amphibians, reptiles, bats, birds, and small mammals.

Lifespan: Mississippi Kites can live to 11 years of age in the wild.

Reproduction: Breeding first occurs around 2 years of age, and nesting is typically in small colonies. In shallow, poorly constructed, bowl-shaped stick nests, 2 eggs are laid, and both parents share incubation duties for approximately 31 days. The young fledge around 5 weeks of age, but the family group often forages together afterwards.