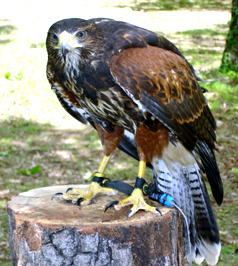 Distribution: They range from southwestern United States through Central and South America in semiarid/scrub desert-type habitats.

Diet: These hawks hunt birds, lizards, and medium-sized mammals such as rabbits.

Lifespan: Harris’s Hawks can live for 11 years in the wild and 25 years in captivity.

Reproduction: Breeding first occurs between 1-3 years of age. Harris’s Hawks build stick nests in cacti, trees, bushes, and on man-made structures in which 2-4 eggs are laid. Incubation, lasting 31-36 days, is done primarily by the female with some assistance from the male and other birds in the family group. Young hawks fledge at 6 weeks but stay near the parental territory for about 3 months while learning to hunt from the adults.

Subscribe to our quarterly newsletter below and never miss the latest news and special events.