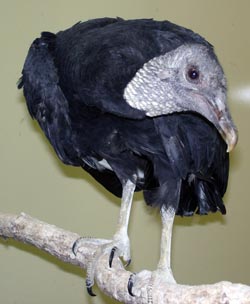 Distribution: Black Vultures are found through parts of central and southern United States and in South America. These birds migrate to warmer regions during the colder time of year.

Diet: These vultures scavenge for carrion but have also been known to take sick, small, or unprotected young mammals and birds. Along with their red-headed cousins, Turkey Vultures, these birds can sometimes be seen walking through freshly cut hay fields in search of dead mice and rabbits that were killed during mowing and are deteriorating.

Lifespan: They usually live about 5 years in the wild, but can live over 20 years in captivity.

Reproduction: Breeding occurs around 3 years of age. Black Vultures do not build nests. Two eggs are laid in a cave, at the base of a tree, in a hollow tree or log, between large rocks, or sometimes under a bush. Incubation is done by both parents for 38-45 days. Young vultures fledge around 3 months of age but often stay with their parents as part of a social group for years.