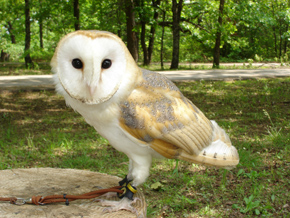 Diet: Small rodents such as mice and voles make up the majority of the Barn Owl’s diet, with the occasional bird, fish, reptile, or insect.

Lifespan: Barn Owls in the wild usually live for 3-4 years, however there is documentation of a wild Barn Owl living for over 30 years!

Reproduction: Barn Owls, like most owls, do not construct a nest. Breeding occurs at one year old, and 3-10 eggs are laid in a tree hollow, cave, on a cliff, or in and on man-made structures such as barns, silos, and various towers. Incubation is conducted only by the female and lasts around 33 days. Young owls fledge at around 2 1/2 months of age but stay in the area until about 5 months of age. The breeding pair can lay another clutch of eggs, in the same nest, before the young from the first clutch have fledged.