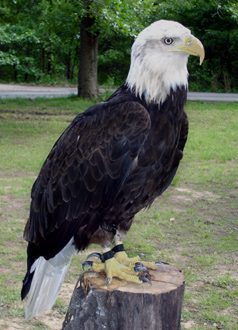 Distribution: Bald Eagles are found throughout North America and in northern Mexico. Those birds nesting in the northern part of the range are larger than the eagles that nest in the southern portion of the range.

Size: Bald Eagles are 27-38 inches long, have a wingspan of 6 – 7 1/2 feet, and weigh 7-14 pounds. As with many raptors, males are as much as one-third smaller than females, although there is some overlap in sizes of genders.

Diet: Fish are the main source of food, but these eagles also eat birds, reptiles, small mammals such as rabbits and squirrels, and carrion.

Lifespan: These eagles have been known to live as long as 28 years in the wild, and over 50 years in captivity.

Reproduction: Bald Eagle eyries, stick nests in the tops of tall trees or on cliffs, are usually near bodies of water. The same eyrie may be used for several years. These birds often repair 2-3 nests in close proximity to each other before finally choosing one in which to lay their eggs. Breeding occurs at sexual maturity, around 5 years of age, corresponding with the head and tail feathers becoming all white. The female lays 1-3 white eggs and incubates for an average of 35 days. The male will hunt and bring food back to the nest for the female to tear apart and feed to the eaglets. The young eagles fledge approximately 10-12 weeks after hatching.