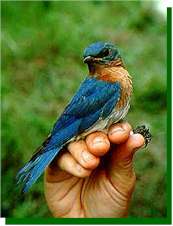 To collect demographic population data and reproductive success and survivorship data on birds associated with tallgrass prairie, we are cooperating with the Monitoring Avian Productivity and Survivorship (MAPS) program developed at the Institute for Bird Populations (Point Reyes Station, California). From 1992 to 1996 we operated 12 MAPS mist netting stations in Osage and Washington counties, Oklahoma.

The MAPS program is a standardized procedure involving the capture of birds through the use of mist nets. In our study, mist nets were erected in prairie-edge habitats where we capture species such as Painted Bunting, Bell’s Vireo, Field Sparrow, Dickcissel, Brown Thrasher, and Northern Cardinal.

From 1992 through 1996 we captured approximately 4000 individuals (excluding recaptures). For each individual captured we record the species, sex, age, breeding condition, and several morphometric measures (e.g., culmen length, wing chord). In addition, each bird was fitted with a serially numbered aluminum U.S. Fish and Wildlife Service leg band that allows us to identify the individual if it is recaptured. By comparing the proportion of juvenile to adult birds captured, we can compare relative rates of reproductive success among years. Survivorship for each species can be determined by analyzing annual recapture rates. 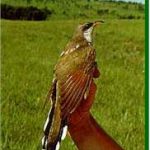 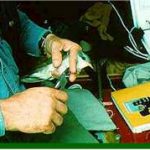 Placing a numbered leg band on a Yellow-billed Cuckoo allows later identification if the bird is recaptured. 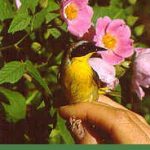 This male Common Yellowthroat with wild roses resulted in a stunning portrait. 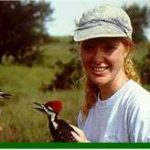 Pileated Woodpeckers are present in larger wooded areas within the tallgrass prairie.

Wing chord is one measurement taken on birds such as this Dickcissel while banding them. Measuring a Dickcissel.

American Goldfinch caught in a net. 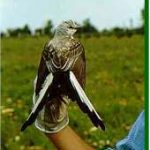