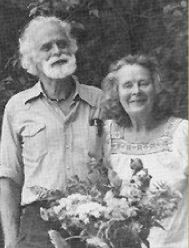 The Society of Tympanuchus Cupido Pinnatus, Ltd. (STCP) was founded in Wisconsin in 1961 by a handful of conservation minded Milwaukeeans. Led by Dory Vallier and Willis Sullivan, Sr., STCP was quickly formed as a non-profit organization and went to work. STCP’s goal was simple: “to preserve and protect the prairie-chicken”.  At the time, concern had been expressed by noted wildlife biologists Drs. Frederick & Frances Hamerstrom (pictured above) about the amount of grassland habitat that needed to be protected to ensure the survival of the species in Wisconsin. Once found in every county of the state as late as 1948, the population and range had decreased dramatically and the species was holding on only in the grasslands and failed farming regions of Central Wisconsin.

Once STCP was organized, critical properties were surveyed and identified by the Hamerstroms and Oswald Mattson. And, in a timely and efficient manner, STCP raised private funds and purchased these grassland reserves. These parcels of land varied in size and were acquired in a scatter-pattern approach developed by the Hamerstroms called “ecological patterning.” The concept protected suitable blocks of prairie-chicken habitat interspersed throughout the landscape. Humans and human activities are part of this landscape and ecological patterning looks at the big picture addressing the needs of humans and wildlife so that both can co-exist.

During the 1960’s and early 1970’s, STCP purchased over 7,000 acres. At the same time, the Prairie Chicken Foundation, which was an affiliate of and is today survived by the Dane County Conservation League purchased over 4,000 acres. Because of compatible land uses on adjoining lands, it was believed by some at the time that this amount of land would secure a future for the prairie-chicken in Wisconsin. Combined with additional lands purchased by the State, today there are over 17,000 acres of protected grassland reserves in Central Wisconsin that are managed by the Wisconsin Department of Natural Resources (WDNR).

Transfer of Lands to Public Ownership

Over the years STCP continued to monitor the status of prairie-chickens on their lands. But as taxes increased, it seemed more beneficial for everyone involved to put the lands into State ownership. And so, in 1989, under a special agreement, STCP sold its properties to the State of Wisconsin for $1 million (over $1 million under appraised value). The agreement stated that 90% of former STCP lands must be managed by the State for the purpose of preserving, creating, and improving nesting, brood rearing, and winter habitat for prairie-chickens and that the remaining 10% be used in a manner consistent with prairie-chicken management.

With the prairie-chicken situation felt to be secure in Wisconsin, STCP decided that in addition to maintaining a primary focus on prairie-chickens, it would assist additional watched, threatened or endangered species in the state. To this end, STCP also pledged to WDNR, to fund $500,000 in grants over a 20-year period to help support Wisconsin’s threatened and endangered species research & recovery projects. These grants were awarded by the STCP Council of Chiefs after review by its Projects & Research Committee and approval by WDNR. STCP fulfilled its pledge to WDNR ahead of schedule funding numerous projects ranging from prairie-chickens and Peregrine falcons to Trumpeter swans, song birds and bats.

As STCP entered the early 1990’s it’s Council of Chiefs took serious note of what was happening to other prairie-chicken populations in the Midwest. The species had disappeared from Michigan and Indiana, was close to extirpation in Illinois, their numbers were seriously declining in Missouri and Oklahoma, and the Attwater’s prairie-chicken was endangered. Would Wisconsin’s prairie-chickens follow in this wake? In spite of the fact it was believed enough land has been preserved, other factors including adjoining land use changes seemed to be working against the long-term survival of this state listed threatened species.

Prairie-Chicken Research: The Search for Answers

In order to get to the heart of the problem and find out what factors were adversely affecting prairie-chickens in Wisconsin and scientifically evaluate their status, STCP hired Dr. John Toepfer, one of the foremost authorities on the species and in 1996 embarked on an extensive field research project titled: Prairie Chickens & Grasslands: 2000 and Beyond (PCG2B). Included in the research were studies on dispersal, diseases, nesting success, survival, food, open space, pesticides, parasites, urban sprawl, recruitment & brood rearing, translocation methods and genetics. This major project was initiated, overseen and guided by STCP President Russ Schallert and brought to completion by STCP President Bernie Westfahl.

Although focused in Wisconsin, STCP research was conducted throughout the national range of the species so comparisons could be made with other populations. During the ensuing seven years, over 4,600 prairie-chickens were trapped and followed in seven states. In the end, PCG2B cost nearly $1.5 million. But, the information gathered through the intensive research may help save the prairie-chicken in Wisconsin and could have lasting influences on the species across its’ range.

The project came to completion in 2003 and a final report was published and distributed to the STCP Council of Chiefs, STCP members, and to wildlife professionals across the country. The findings were stark. Prairie-chickens in Wisconsin had lost additional range and sub-populations had become isolated due to loss of connectivity brought upon by fragmented habitat. Even worse, genetic comparisons with contemporary prairie-chicken populations in the Great Plains and historical genetic samples from the 1950’s saved by the Hamerstroms, indicated that Wisconsin’s prairie-chickens had lost genetic diversity. This loss had reached a point where their genetic makeup was comparable to the Heath hen, thirty years before they became extinct. The final chapter in this report made recommendations to the WDNR on what needed to be done immediately to turn the tide and save the prairie-chicken in Wisconsin. These recommendations included reconnecting the sub-populations, adding at least 30,000 additional acres of habitat, and translocating prairie-chickens from outside Wisconsin to boost genetic diversity.

Following the recommendations spelled out in PCG2B, the WDNR held a genetics summit in Madison which was attended by several geneticists from across the country. The geneticists reviewed all the available data and recommended that besides adding at least 15,000 acres of habitat, that translocations get underway without delay.

Subsequently, the State of Wisconsin contracted with STCP to translocate 40 prairie-chicken hens from Minnesota into Wisconsin to increase genetic diversity.  In September of 2006, these 40 birds were brought in from Minnesota and released on the Buena Vista Marsh – a move that has forever changed Wisconsin’s prairie-chickens and should provide a healthy genetic boost to this isolated population. Cooperators and partners in this project included the Minnesota Prairie Chicken Society, Minnesota DNR, Wisconsin DNR and private landowners.

In 2007, this program was continued by the WDNR and another 24 hens were trapped and brought in from Minnesota which in the short-term should improve the current genetic situation. However, the real issues STCP identified regarding range contraction, habitat loss and connectivity between sub-populations still need to be seriously addressed if prairie-chickens are to be self-sustaining and have a long-term secure future in the state.

Our Future: Help for Prairie Chickens and Prairie Grouse

So where is the future for STCP? With populations of prairie grouse becoming fragmented and isolated along with the continual loss of native prairie and the projected loss of hundreds of thousands of acres of CRP, a number of states are working to attempt to save their remaining prairie-chicken populations and hold onto what is left.

If there are going to be prairie-chickens to translocate into these areas, there will need to be healthy populations to draw from. These healthy populations still exist in the Great Plains states of Nebraska, South Dakota and Kansas which are the last true stronghold for the species.

But even in these larger populations, there are serious questions that remain pertaining to their needs and ecology and whether or not they will be able to adapt to increasing habitat changes that include wind generator complexes and the conversion of grasslands for ethanol production. STCP is also interested in helping to re-establish and secure connectivity between fragmented portions of these existing populations to maintain genetics and restore distribution.

The better our understanding and knowledge of prairie-chicken and prairie grouse ecology and what it will require to maintain their populations, the more secure their futures might be. Thus, the best thing STCP can do to help prairie-chickens in Wisconsin as well as other small, remnant populations today, is to insure there are large enough populations elsewhere to bring birds in from in the future. If any future restorations and translocations are to take place, their source populations must be secure.

This is the reality of the situation and if we ignore it we may soon see the Greater prairie-chicken added to the Federal list of Endangered Species. One need only stop to consider what has happened to the Heath hen, the Attwater’s prairie- chicken and every population of prairie-chickens east of the Mississippi River.

As such, STCP will focus on looking at prairie-chickens and related prairie grouse populations not only in Wisconsin, but for Wisconsin’s benefit, range-wide with a focus on the Great Plains.

At present STCP is involved in a multi-year project in Texas working to evaluate the release of pen-reared Attwater’s prairie-chickens (APC) (the most endangered grouse in North America). This evaluation includes monitoring movements, dispersal and survival of the released APCs. The project is a partnership with the Grazing Lands Conservation Initiative (GLCI), The Nature Conservancy (TNC), Texas Parks & Wildlife (TPW), the Attwater’s prairie-chicken captive-rearing facilities, Papalote Land & Cattle Company, STCP, the Natural Resources Conservation Service (NRCS) and the U.S. Fish & Wildlife Service (USFWS). For links to these organizations please visit our Projects page.

Since 1995, 1,839 APCs have been released from captivity back into the wild.
STCP became directly involved with this recovery effort in 2007 when, 55 pen-reared, juvenile APCs were released into the wild for the first time on a private ranch at the Goliad County project site. This was followed by the release of over 130 birds in 2008, 241 in 2009 and 133 in 2010. As part of this project, young of the year Greater prairie-chickens are also being radio-tracked by STCP in northwestern Minnesota as a control group to compare with the pen-reared Attwater’s prairie-chickens in Texas.

STCP is also conducting a long-term evaluation of prairie-chicken nesting, and distribution relative to the Conservation Reserve Program in Minnesota and North Dakota and in 2012 initiated a new field research project in the Nebraska Sandhills – the region that holds perhaps the most secure population of prairie-chickens in the country.

STCP is still the small organization that gets things done…..it’s mission for the future will be to expand and broaden this role. To this end, STCP will continue to conduct traditional on-the-ground fieldwork and combine this with current technology and science in partnerships with other states and conservation organizations and individuals to provide real solutions to real problems for prairie grouse and human activities in North America.