Limited # of seats; RSVP here to secure your spot (or email us and we’ll put you on the list)

This richly illustrated 1-hour Powerpoint presentation will provide an overview of Peregrine Falcon recovery efforts in Wisconsin between 1987- 2015. Discussions will include recovery methods and approaches utilized in the creation of an urban nesting population along the Lake Michigan shoreline. Also covered will be nest box designs, urban nest site management issues and resolutions, band returns, dispersal of hacked and wild-produced falcons, nesting chronology, prey species, overwintering, environmental contaminants and the role of electric power generating plants in the recovery of the population. The reoccupation of historical cliff eyries along the Mississippi River and recovery efforts on the Door Peninsula will also be covered. And finally, we’ll take a look at what the future may hold for the Peregrine Falcon in Wisconsin. 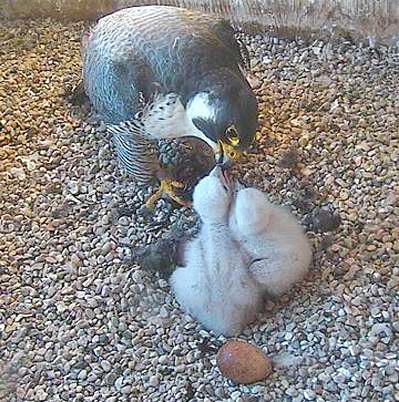 With over 30 years of museum experience, Septon has organized and led several collecting expeditions and spent four springs along Alaska’s Arctic coast, living with the native Inupiaqs photographing, collecting, and painting birds. He has also conducted fieldwork in Tasmania and on the Australian mainland, as well as in the rain forests of Costa Rica.

Septon has lectured in 17 countries and published over 70 articles on museum techniques, birds, and natural history. His works are in the permanent collections of four museums and several private collections. And, his bird paintings have been juried into
the Leigh Yawkey Woodson Art Museum’s annual “BIRDS IN ART” exhibition. Septon has special interests in endangered species recovery programs and environmental conservation efforts. For nearly 30 years he has directed and managed a successful and expanding urban peregrine falcon recovery effort in Wisconsin and has banded nearly 900 wild-produced peregrines. Working in conjunction with the U.S. Fish & Wildlife Service’s Office of International Affairs, he also implemented an urban Peregrine Falcon recovery program in Russia and has been involved with initiating a similar program in Poland.

Septon is an elected Fellow of the Explorer’s Club and served on the Research and Conservation Committee of the Zoological Society of Milwaukee County and as Vice President of the Artists For Nature Foundation. He also served on the Executive Board of the Raptor Education Foundation, was founder and Chairman of the Wisconsin Peregrine Society, past leader of the State of Wisconsin Peregrine Falcon Recovery Team and Chair of the Projects and Research Committee and Executive Director of the Society of Tympanuchus Cupido Pinnatus, Ltd. (STCP). With the dissolution of STCP in 2015 and transfer of assets to the G. M. Sutton Avian Research Center, Greg became a member of their Board of Directors and will assist in the Center’s expanded prairie grouse conservation efforts.

In 2014, he received the Noel J. Cutright Conservation Award from the Wisconsin Society for Ornithology. The award recognizes outstanding contributions to bird conservation in Wisconsin and was presented for his work with endangered and threatened species. Past recipients include the International Crane Foundation and the Wisconsin DNR Bureau of Endangered Resources.

His current efforts are focused on writing and the conservation, recovery and management of endangered & threatened species, specifically Peregrine falcons and prairie grouse. In his spare time he enjoys time with his family and grouse and quail hunting on the prairies and grasslands of the Great Plains.