From Grizzly Bears to Grey Wolves, Joel Sartore has seen it all. The renowned wildlife photographer has completed 17 stories for National Geographic Magazine, all of them focusing on natural history and wildlife.
In addition, Sartore’s photos have also run in Life, Newsweek, Sports Illustrated and Time. Born in Oklahoma and raised in Nebraska, Sartore brings a sense of humor and Midwestern work ethic to all his assignments. 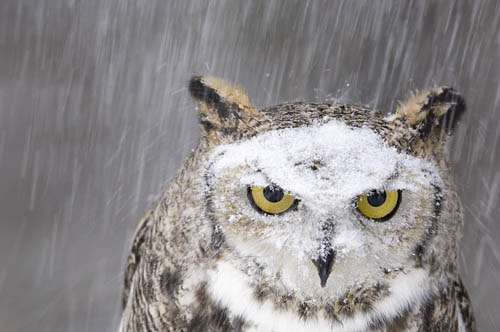 Sartore shared the stories of his work in a visit to Oklahoma, March 5-8 as the 2007 Sutton Natural History Forum Speaker. Established by the George Miksch Sutton Avian Research Center, a non-profit organization and affiliated with the Oklahoma Biological Survey at the University of Oklahoma’s College of Arts and Sciences, this annual program is sponsored by F&M Bank and Trust Company of Oklahoma, with assistance from Public Service Company of Oklahoma, Riggs, Abney, Neal Turpen, Orbison & Lewis Law Firm, Frisco Title Services, the Holmes Organisation, Intervest properties and Acron. Speakers are selected on the basis of their contributions to conservation education through the visual arts.
Sartore’s presentations included samples of his work and reached approximately 12,000 thousand Oklahoma students during his visit. Presentations for students were made at the Bartlesville Community Center, as well as at schools in Tulsa and Sand Springs.

The Sutton Natural History Forum provides captivating presentations of conservation topics, as well as the opportunity to learn about careers responsible for bringing us glimpses of the world’s wildlife.

A companion program, the Sutton Scholarship Award, provides up to $35,000 in annual scholarship funds to Oklahoma high school students and their schools, for winning recipients who demonstrate an ability to communicate a current conservation topic in an artistic, dramatic, or compelling way through a movie, photo essay, fine art, or advertising.

Education is a primary component of the Sutton mission and the Center has developed a middle school program that features a live bird demonstration. The Sutton Center is bringing the show to schools throughout the state at no cost to individual schools. The format encourages youngsters to learn more about the value of bird life and its contribution to our national environment.

Joel Sartore was born in Ponca City, Oklahoma but has lived most of his life in Nebraska. After working as a photographer for The Wichita Eagle newspaper, he became a contract photographer for National Geographic in 1990.

His work has also appeared in Audubon, Life, Newsweek, Sports Illustrated, Time and numerous book projects including the “Day in the Life” series. His adventures have been the subject of several national television shows including National Geographic Explorer and CBS This Morning.

Joel first became acquainted with Bartlesville’s Sutton Avian Research Center when he photographed their work for a major article on Bald Eagles in the November 1992 issue of National Geographic, and he has continued to stay involved with the Sutton Center since that time.

Another of Sartore’s recent articles in National Geographic is about highly endangered Attwater’s Prairie-Chickens in the March 2002 issue of the magazine. He has photographed fascinating animal species all over the world from Bolivia to Alaska to Great Britain and has adventure stories to match.

Grizzly Bears (July 2001), Gray Wolves (May 1998), Nebraska (November 1998), Dead or Alive (The Endangered Species Act; March 1995), Federal Lands of the West (February 1994), and Hurricane Andrew Aftermath (April 1993) are just a few of his many features that have appeared in the internationally acclaimed magazine.

Some of Joel’s Work can also be seen at his web site, www.joelsartore.com.