History of Lead-poisoning in Wildlife 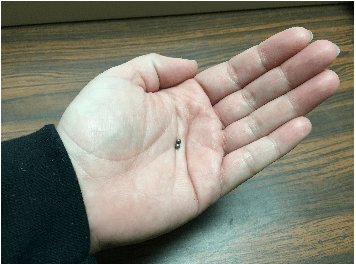 Lead has been used in human civilization for thousands of years, and traditional lead ammunition has become modern hunters’ primary means of taking game animals because of its high availability and low cost. While 1991 brought about a federal ban on using lead ammunition to hunt waterfowl, due to ducks and other aquatic species dying after consuming lead shot, lead ammunition can still be used to hunt upland game birds as well as deer, elk, and nuisance animals across Oklahoma and beyond. The threat of using lead in ammunition, for both non-target wildlife and the hunters and their families alike, is that consuming even small particles can cause serious neurological problems and even death (read a review paper co-authored by Sutton Center biologist Don Wolfe). To date, over 130 species of wildlife have been documented with lead poisoning. For an adult bald eagle, eating two pellets of No.6 lead shot (as seen to the right), or ingesting enough lead fragments from a lead core bullet, which constitutes most traditional ammunition, is enough to kill them.

Why is lead a threat to Bald Eagles?

Ammunition consists of four key components: the bullet (the projectile), the cartridge, the primer, and gun powder. Lead core bullets are the most common projectile on the market today, and while they are cheap they also easily fragment. Once a round has left the barrel of a hunting rifle, the lead core bullet strikes the game animal and travels through the tissue, leaving behind a trail of small (often microscopic) lead fragments. 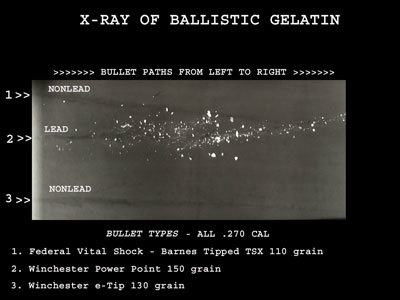 An x-ray radiograph of ballistic gelatin that has been shot with traditional lead ammunition (top), as well as non-toxic copper ammunition (bottom) – [Courtesy of The National Park Service]

In the photograph to the left, the lead round in the middle of the ballistic gelatin has left a trail of small lead fragments.  Most hunters field dress their deer, or other game animal, and leave behind the entrails. For a hungry bald eagle in Oklahoma during the winter, these abandoned organs can only mean one thing — dinner. The problem, however, is that those hundreds of lead fragments are often lodged inside the gut piles, and the bald eagle consumes them along with her scavenged meal.

How can I reduce Bald Eagles exposure to accidental lead-poisoning? (click to find out)

Read more here about lead ammunition and efforts to encourage hunters to switch to copper.