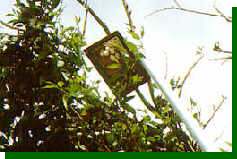 Modifications (e.g., burning, mowing, and application of pesticides) of roadside habitats on a large scale may significantly impact the amount and quality of habitat available to nesting birds. In Oklahoma alone, we have estimated that there are close to 500,000 acres of roadsides. To help determine the importance of roadside habitats to nesting birds, as well as factors influencing their nesting and reproductive success, the Roadside Study was initiated as part of our overall research effort on prairie and prairie-edge bird species. 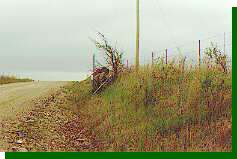 Each roadside plot was checked for nests twice weekly. Trees and shrubs along fence rows provide habitat for many tree-nesting species that do not breed in open prairie.

The roadside habitat associated with these plots varied in width, but averaged about 7.5 m. Plots were vegetated with grasses, forbs, shrubs, and trees. Botanically, the primary difference between roadside plots and prairie plots is the presence of shrubs and trees on the roadsides, which provide nesting habitat for tree nesting species. Nests were found by systematically searching each plot.

Once a nest was found, the location was recorded and discretely marked. Nests were monitored through fledging or failure to determine rates of nesting and reproductive success. Insects were sampled on each plot in mid-May, mid-June, and mid-July, and the number of shrubs and trees were counted once per year. We located and monitored 1516 nests of 31 species on or near the roadside plots, and calculated their probability of success (expressed as the proportion of nests that survived with each passing day from the onset of incubation). 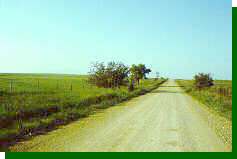 These probabilities were compared between burned, half-burned (where only one side of the road was had been burned), and unburned plots, as well as between groups of birds classified on the basis of nesting substrate (ground, shrub, tree or culvert). 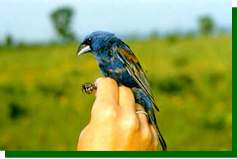 All in all, the results suggest that although prescribed burning improves nest success probabilities due to the increase in arthropod biomass, only species that breed in sites that are relatively safe from predators (culverts or trees) may enjoy high probabilities of nest success. Therefore, both positive and negative effects of burning should be considered in future management and conservation programs of prairie roadside birds.