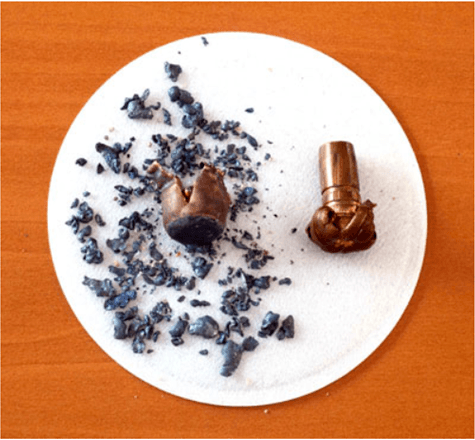 Comparison of bullets recovered after being fired into rain barrel. On left is a jacketed lead bullet, on the right is a solid copper bullet. (Courtesy of The National Park Service)

Get the Lead Out – Science-based solutions

Fortunately for our population of Bald Eagles, solutions to the toxic ammunition conundrum exist. As mentioned previously, traditional lead ammunition fragments once inside of a game animal (see photo to left), making it almost impossible for a bald eagle to eat a gut pile without consuming the leftover bullet fragments it contains. However, new technology has created non-lead ammunition, most often made of solid copper that does not fragment, and thus does not pose the lethal hazard that lead ammunition does.

The United States military has recently made the switch to copper ammunition, and both soldiers and hunters who have used the non-lead ammunition have described it as being more accurate than its traditional lead counterpart.

Our goal is to reach as many hunters and ranchers about the benefits that switching to non-lead ammunition could have on our Nation’s Bald Eagle population. Many common calibers and loads exist on the commercial market, and our outreach program was conceived as the means by which the curious public could try these ammunition alternative for themselves. Check back in for updates on upcoming gun range demonstrations that the Sutton Center will be organizing throughout Oklahoma.

Where to find non-toxic ammunition for yourselves?

For a list of non-lead ammunition manufacturers, please visit:

Below are links where you can read more about lead poisoning in bald eagles and other wildlife: